Reasons Drivers Should Stop Holding On To Their Old, Junk Cars

Have you considered that it may be time to give up that old, junk car you’ve been holding on to for years? Whether you’re still driving it around or it’s just sitting unused somewhere on your property, you have to wonder if it’s really benefiting you to keep it around. Though most people could always use extra money in their pocket, there are several additional explanations why selling junk cars for cash can be more advantageous for vehicle owners than trying to maintain them or store them for sentimental reasons.

People Accuse You of Hoarding

It’s one thing if you deem yourself a car collector, but it’s another if you’re allowing junk cars to pile up in your yard for no good reason. When people begin to identify you as a junk car hoarder, that’s a good indication that your property is beginning to look like a mess. Even just one undesirable looking vehicle parked in the driveway, on the street or tucked away in the side or backyard, is an eyesore and can cause displeasure among your neighbors, bring the value of your home down and diminish the quality of your living environment. If you’re starting to get glares around the neighborhood or hear whispers involving your name, it’s time to part with that junk car.

The Repairs Aren’t Worth the Investment

Car owners that are still trying to salvage their junk car by investing in multiple repairs must eventually face the fact that the costly labor and parts aren’t getting them anywhere. If a car is becoming more of a financial burden than it is useful, cutting your losses is usually the best course of action to take. Not only do you have to worry about the constant bills from the mechanic, but also the possibility that one day you’re going to break down and get stranded. 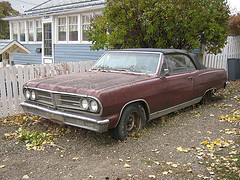 Another thing to keep in mind is the liability that comes with having a junk car around. Many things can go wrong with a vehicle, even when it’s just sitting. If it’s on your property, you’ll be responsible for it and all the threats it poses, which can include leaking fluids, broken glass, rusted metal and any injuries or damages that happen as a result. There may also be fines in your community for allowing a non-running vehicle to stay in one place for a long period of time.

Value Will Continue to Decline

It’s no secret that the monetary value of a vehicle begins to decrease as soon as it’s driven off the car lot. While every car maintains some kind of value, mainly because of its parts, it’s only safe to rationalize that it’s going to continue to decline as time goes on. So, the longer you wait to get rid of your junk car, the more chance there is that the offer you’ll receive will get lower and lower.

Drivers who want to make some money instead of putting their hard-earned cash into junk cars that aren’t really worth it should look into seeing what their options are for selling, and the sooner, the better.

3 thoughts on “Reasons Drivers Should Stop Holding On To Their Old, Junk Cars”